World Fair Trade Day is celebrated at the beginning of May. This little-known holiday is unique and inspiring to us because it points to the values we have been holding at so linen! for years.

FAIR TRADE WHAT IS IT?

The International Fair Trade Day is celebrated every second Saturday in May. The celebration is reduced to both pure entertainment – outdoor games, concerts and demonstrations – as well as debates designed to make the public aware of how important and meaningful our consumer decisions are.

Fair Trade Day is a series of global events designed to promote awareness and equality. The intention was to combat poverty, climate change and the economic crisis that is often the result of inappropriate mass trade.

This holiday appeared on the pages of the calendar a few years ago. In 2002, at a conference in Tanzania, the idea and initiative emerged to celebrate a day that would raise awareness of the impact of trade on wildlife. The idea appealed to global organizations that helped promote the new socially important holiday.

In Poland, the first recorded celebration of the holiday took place as late as in 2006, when the Polish Fair Trade Association introduced certified products to the domestic market. Interestingly, almost every year a slogan is created that points to the industry’s most current problem. Thus, for example, in 2008 the motto “Fair Trade + Ecology” reigned supreme, and in 2016 “Human Chain for Fair Trade and the Planet”.

WHAT PRINCIPLES DOES IT PROMOTE?

Fair trade is about equality, mutual respect, supporting the ecology and resources of our planet. Among the greatest values and ideas, they list:

HOW CAN YOU CELEBRATE FAIR TRADE DAY?

We‘ve already written on our blog how with a little effort we can impact our planet –10 eco-friendly solutions for your home. The same is true of the Fade Trade philosophy, which primarily supports local entrepreneurs working with regional products. According to the Fair Trade rule, it is also recommended to choose environmentally friendly products – produced without plastic, according to the zero waste principle, with respect for human labour and creativity. This principle is particularly close to our hearts, because every product in so linen! – whether it‘s a linen curtain or a linen duvet cover – sewn on site, specially made to order. In production we use ecological, natural flax, which supports the environment and does not participate in the production of components harmful to fauna and flora (including pesticides, chlorophenols, formaldehyde, allergenic dyes).

In addition, respecting the persistent and creative work of our seamstresses, to each order we attach a note with the name, indicating which of the ladies has prepared the most beautiful natural tablecloth, light muslin curtain or delicate bedding for the baby‘s crib. You can see the tags and packaging in the stories of our clients on our Instagram account.

When supporting Fair Trade principles, pay attention to the composition of products, choose trusted suppliers, opt for companies that have a fair pricing policy and resign from mass production. Every little bit makes a difference to our planet – support it by spreading fairness and celebrating World Fair Trade Day all year round!

The American Thanksgiving is just around the corne 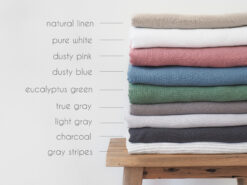